Top ten hand-picked hard riddles. If these top 10 riddles were a sport it would be Extreme Riddles! Challenge your friends. Printable PDF! 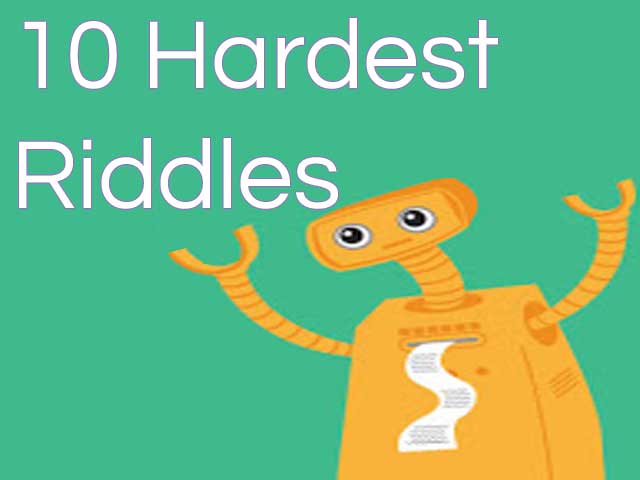 From the cunning conundrum to the precarious puzzle to the intricate enigma you will need all of your brainpower to solve these ridiculously hard riddles! How many can YOU solve?

Riddle: I am taken from a mine, and shut up in a wooden case, from which I am never released, and yet I am used by almost everybody. What am I?
Answer: Pencil lead.
Show Answer Hide Answer

Riddle: You walk up to a mountain that has two paths. One leads to the other side of the mountain, and the other will get you lost forever. Two twins know the path that leads to the other side. You can ask them only one question. Except! One lies and one tells the truth, and you don't know which is which. So, What do you ask?
Answer: You ask each twin What would your brother say?. This works because.... Well let's say the correct path is on the left side. So say you asked the liar "What would your brother say?" Well, the liar would know his brother was honest and he would say the left side, but since the liar lies, he would say right. If you asked the honest twin the same question, he would say right, because he knows his brother will lie. Therefore, you would know that the correct path was the left!
Show Answer Hide Answer

Tell Us The Day!

Riddle: A group of campers have been on vacation so long, that they've forgotten the day of the week. The following conversation ensues. Darryl: What's the day? I don't think it is Thursday, Friday or Saturday. Tracy: Well that doesn't narrow it down much. Yesterday was Sunday. Melissa: Yesterday wasn't Sunday, tomorrow is Sunday. Ben: The day after tomorrow is Saturday. Adrienne: The day before yesterday was Thursday. Susie: Tomorrow is Saturday. David: I know that the day after tomorrow is not Friday. If only one person's statement is true, what day of the week is it?
Answer: It is Wednesday. If it was any other day of the week, more than one statement would be true. To solve the riddle, evaluate each person's statement and write down what day it could be according to the statement. David's statement indicates it could be any day of the week except for Wednesday. When you list the days that it could be according to everyone's statement, it turns out Wednesday is the day mentioned only one time. Darryl: Sunday, Monday, Tuesday, or Wednesday Tracy: Monday Melissa: Saturday Ben: Thursday Adrienne: Saturday Susie: Friday David: Sunday, Monday, Tuesday, Thursday, Friday or Saturday
Show Answer Hide Answer

Getting Away With Manslaughter

Riddle: Two cars were involved in an accident in the center of town. The man who was driving a little green car, had overtaken a big black car. The driver had misjudged the distance between him and the on-coming traffic and had to swerve back in, causing the black car to swerve and crash into a shop window. When the occupants of the cars were examined everyone in the green car was okay, but in the black car was one dead man. However, the driver of the green car was not charged with manslaughter, why was this so?
Answer: The black car was a hearse and was on its way to a funeral.
Show Answer Hide Answer

Riddle: You are in a room that is completely bricked in on all four sides, including the ceiling and floor. You have nothing but a mirror and a wooden table in the room with you. How do you get out?
Answer: You look in the mirror you see what you saw, you take the saw and you cut the table in half, two halves make a whole, and you climb out the hole.
Show Answer Hide Answer

Riddle: Five baby boomer couples each have one child. Each child is a different age than any of the other children. Each child has a favorite toy which is different from any of the other children's favorite toys. Each family eats at only one fast food restaurant. No two women have the same name and no two men have the same name. The children's names are not known. The child who plays with trains is the youngest. Bill's child plays with a GI Joe. Julie's child likes Pokeman. Mike's family eats at Taco Bell. The family of the 4 year old likes Kentucky Fried Chicken. The oldest child is four years older than Marie's child. The child who plays with Barbie is 8 years old. The child with the age is in the middle, has a mother named Marie. The child in the family that eats at McDonalds has a two year age difference with Larry's child. Carol is the mother in the family that eats at Dairy Queen. The child that plays Nintendo likes Burger King. Steve's child is two years apart in age from the child of the family that eats at Kentucky Fried Chicken. The child that plays with trains is two years apart from the 6 year old. The child that eats at McDonalds is two years older or younger than Regina's child. Lisa's child is 10. Who is married to George?
Answer: Lisa is married to George, and their 10 year old plays with Nintendo. They like to eat at Burger King. The associations are: Child age 4, mother Regina, Father Larry, trains, KFC Child age 6, mother Julie, Father Steve, Pokeman, McDonalds Child age 8, mother Marie, Father Mike, Barbie, Taco Bell Child age 10, mother Lisa, Father George, Nintendo, Burger King Child age 12, mother Carol, Father Bill, GI Joe, Dairy Queen To solve, draw a grid with five rows and five columns. Across the top, above the columns, write Age, Mother, Father, Toy and Food. Figure out the known ages and write them in order in the first column. One child's age is unknown at first. However, once the youngest child is discovered (the one who plays with trains) it is then known that the oldest child is the child with the unknown age. Through additional clues, it is possible to determine that the oldest child is age 12. Take the clue, Lisa?s child is 10. In the mother column corresponding to the age 10, you would write LISA (Maybe circle it, because it is the correct answer.) In the mother column for every other age, write "not Lisa". Do this for each clue. If you know the answer because of a clue, write it in the appropriate column, and then be sure to write "not such and such" in all the other rows for that clue. For example, "The youngest child plays with trains", would result in "not trains" for any child you can tell isn?t the youngest, but you can?t write "trains" for any child, because you don?t know which child is the youngest at first. Eventually, you may find that "mother not Marie" is on every line except one, and then you would know that Marie is the mother on the empty line.
Show Answer Hide Answer

Riddle: A man told his son that he would give him $1000 if he could accomplish the following task. The father gave his son ten envelopes and a thousand dollars, all in one dollar bills. He told his son, "Place the money in the envelopes in such a manner that no matter what number of dollars I ask for, you can give me one or more of the envelopes, containing the exact amount I asked for without having to open any of the envelopes. If you can do this, you will keep the $1000." When the father asked for a sum of money, the son was able to give him envelopes containing the exact amount of money asked for. How did the son distribute the money among the ten envelopes?
Answer: The contents or the ten envelopes (in dollar bills) should be as follows: $1, 2, 4, 8, 16, 32, 64, 128, 256, 489. The first nine numbers are in geometrical progression, and their sum, deducted from 1,000, gives the contents of the tenth envelope.
Show Answer Hide Answer
Save: PDF
(No answer boxes)
Save: PDF
(With answer boxes)
Print: Page
Print: Options

If you would like to use this content on this page for your website or blog, we only ask that you reference content back to us. Use the following code to link this page: