Funny Sports riddles from the original Riddles website.  These are the best sports riddles, jokes, and brain teasers for coaches and athletes.  Entertain your classmates or share with your team. 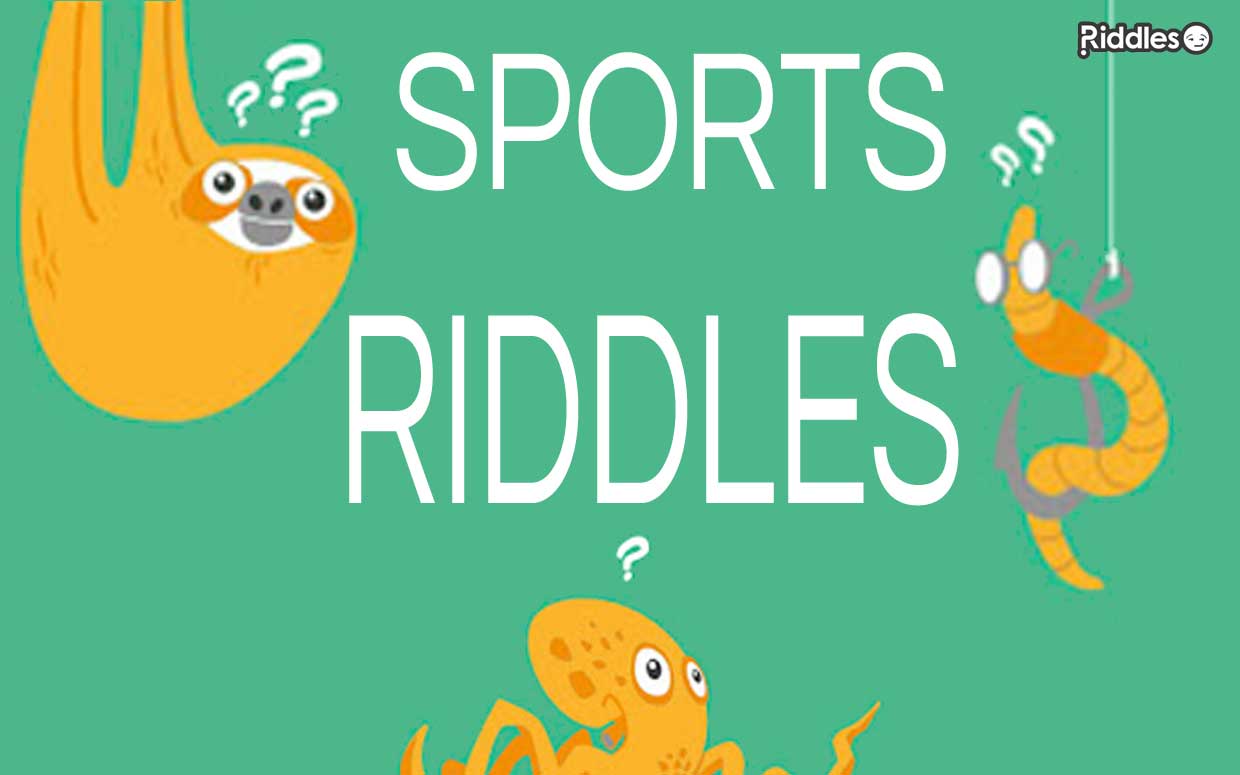 1. Riddle: What did the baseball glove say to the ball?
Answer: Catch you later.

2. Riddle: What time does a tennis player get up?
Answer: Ten-ish.

3. Riddle: Why weren't the tennis players allowed in the restaurant?
Answer: Because they make too much racquet.

4. Riddle: How do you know that a vampire loves baseball?
Answer: Because he turns into a bat every night.

5. Riddle: What animal is the best at baseball?
Answer: A bat.

6. Riddle: A guy was waiting at home, he swung a metal pole then took 3 left turns, and on his way back home there was a masked man waiting for him. What is he doing and who is the masked man?
Answer: He is playing baseball and the masked man is the Catcher.

7. Riddle: John bet Tom $100 that he can predict the score of the football game before it starts. Tom agrees but loses the bet. Why did Tom lose the bet?
Answer: John said the score would be 0-0 and he was right. "Before" any football game starts, the score is always 0-0.

8. Riddle: Why did the football team go to the bank?
Answer: To get a quarter back!

9. Riddle: Name the only sport in which the ball is always in possession of the team on defense, and the offensive team can score without touching the ball?
Answer: Baseball!

10. Riddle: What is a good restaurant for a basketball team?
Answer: Dunkin Donuts.

11. Riddle: Why is the baseball field hot after a game?
Answer: All the fans left.

13. Riddle: Why can't you play basketball with pigs?
Answer: Because they will "hog" the ball!

14. Riddle: Why did the baseball coach hire a piano player?
Answer: Because his player had the perfect pitch! 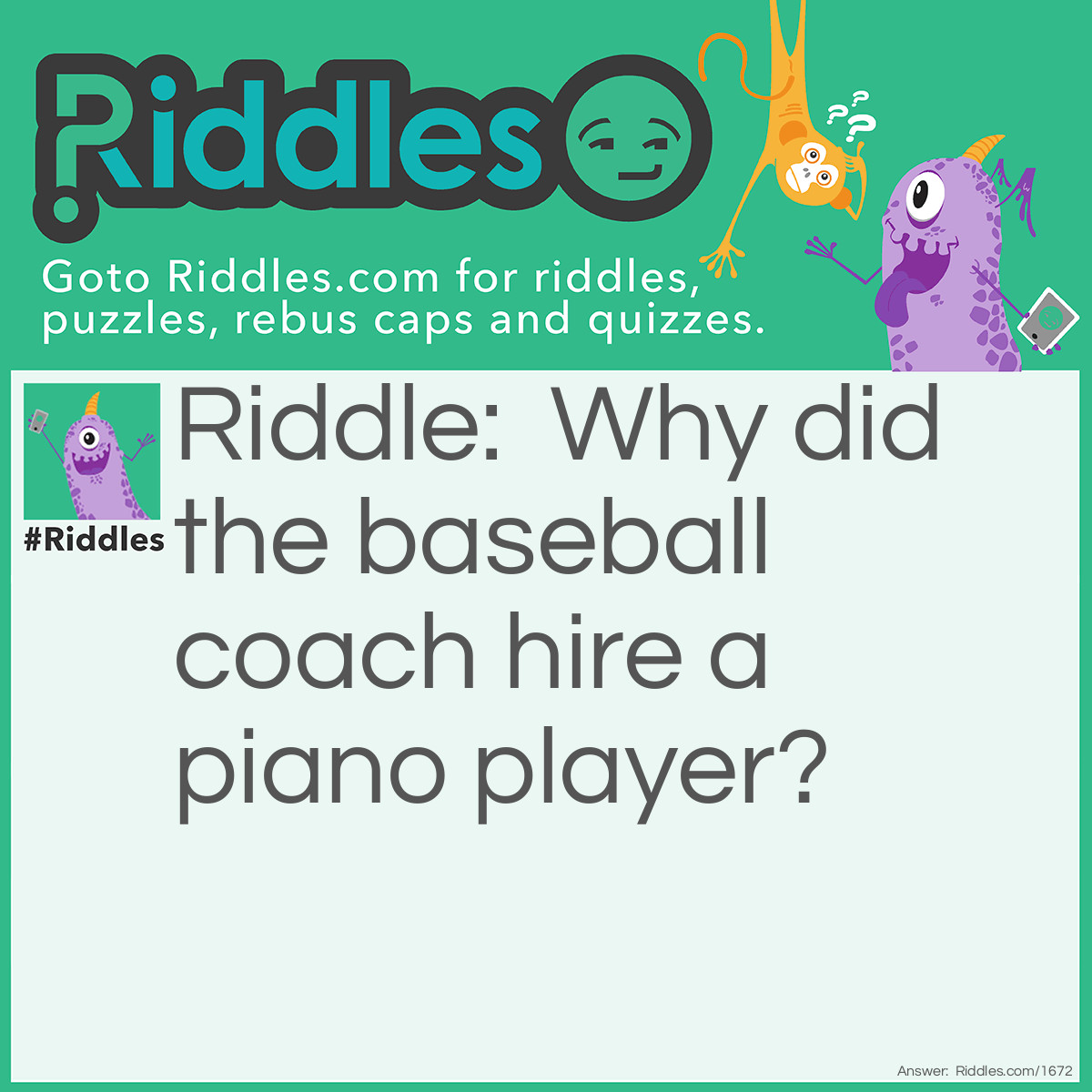 16. Riddle: A man takes a basketball and throws it as hard as he can. There is nothing in front, behind, or on either side of him, and yet, the ball comes back and hits him square in the face. How can this be?
Answer: He threw the ball straight up in the air.

17. Riddle: Do vampires play tennis in their free time?
Answer: No they prefer bat-minton.

18. Riddle: What do you serve that you can't eat?
Answer: A tennis ball.

19. Riddle: Why was the baseball player's food always dirty?
Answer: He always stepped on the plate.

20. Riddle: What was the spider doing on the baseball team?
Answer: Catching flies.

21. Riddle: Two men were playing tennis. They played five sets and each man won three sets. How can this be possible?
Answer: The two men were partners playing doubles.

22. Riddle: Two teams were playing soccer against each other. One player from Team One scored a hat trick (triple goal). Their teammates were very happy. But when he scored the fourth goal, their teammates scolded him instead. How could this be possible?
Answer: The player scored in their own goal.

23. Riddle: Why did the golfer wear two pairs of pants?
Answer: In case he got a hole-in-one.

24. Riddle: What has 18 legs and catches flies?
Answer: A baseball team.

25. Riddle: This object can be driven, but has no wheels, and can also be sliced and remain whole. What is it?
Answer: A Golf Ball.

26. Riddle: What song was the baseball player singing on third base?
Answer: "There's no place like home."

27. Riddle: Why did the golfer change his socks?
Answer: He had a hole-in-one.

28. Riddle: There's one "sport" in which neither the spectators nor the participants know the score or the leader until the contest ends. What is it?
Answer: Boxing.

29. Riddle: Why was the chef hired to coach the baseball team?
Answer: Because he knew how to handle batter. 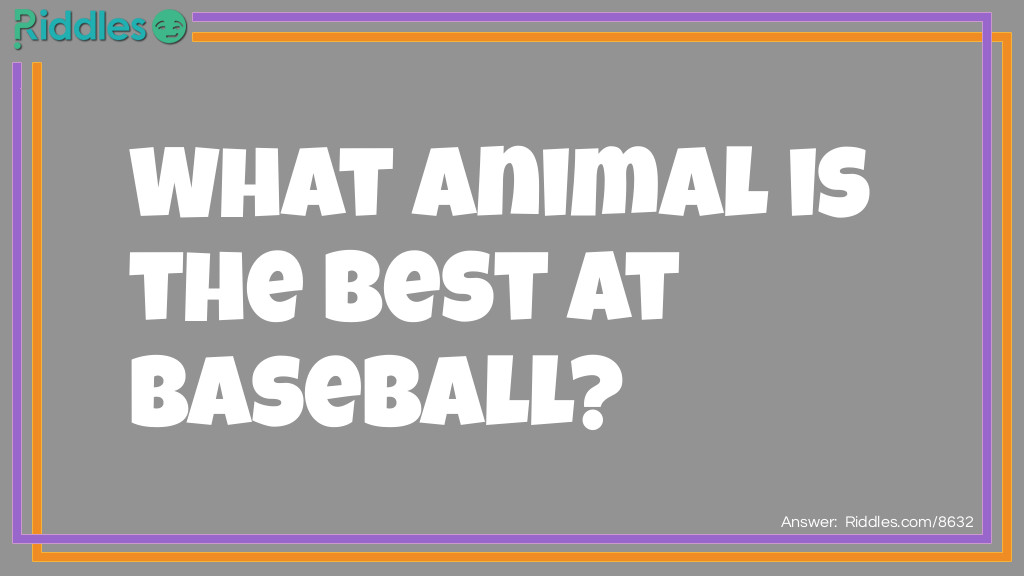 31. Riddle: What position do pigs play on the baseball field?
Answer: Short-stop.

32. Riddle: A man took the shell off of his champion racing snail to make it go faster. Did it work?
Answer: No. In fact, the snail became rather sluggish!

33. Riddle: Why is it always hot at the end of a football game?
Answer: Because all of the FANS have gone home.

34. Riddle: I play on a diamond, I play fair, I always get dirty, And then I run home. What Am I?
Answer: Baseball Player

35. Riddle: A man is running home, where he meets 2 men with masks on. Then he runs away from home. What is this man's job?
Answer: A baseball player. The 2 masked men are the umpire and the catcher.

36. Riddle: Where do great dragon baseball players go?
Answer: To the Hall Of Flame.

37. Riddle: What game makes the most noise?
Answer: Tennis- you can't play it without raising a racket!

38. Riddle: What did the hoop say to the basketball?
Answer: May all your swishes come true!

40. Riddle: What's the first game in the Bible?
Answer: Baseball Why: because In the big inning, Eve stole first, and Adam stole second. Cain struck out Abel, and the Prodigal Son came home. The Giants and the Angels were rained out. Ha ha ha ha ha

41. Riddle: When does boxing day come before Christmas?
Answer: In the dictionary.

42. Riddle: We are five little objects of an everyday sort. You will find us all in a tennis court. What are we?
Answer: Vowels.

43. Riddle: During a soccer match, a player makes a suggestive comment about women into the referee's ear, who promptly waves the red card and sends the player off. Why would the referee do this?
Answer: The referee was a woman.

44. Riddle: What is served, but not by a waiter; and an ace but not a card?
Answer: A volleyball: serving is a classic volleyball move, and a serve that drops without the opposing team touching it is called an ace.

45. Riddle: What do you call a basketball game with no ball?
Answer: A basket game!

46. Riddle: There was a man who everybody called Batman he knew nothing about bats and thought they were gross. He still loved it when people called him Batman! How could this be?
Answer: He was the star baseball player!

47. Riddle: A pro fisherman decided to become a pro golfer. In order to buy his clubs he had to sell his boat. How did he list it?
Answer: Fore Sail!

48. Riddle: Why were the tennis players arrested?
Answer: Because they had racquets.

50. Riddle: In the NBA, how many men are on the basketball court for each team?
Answer: Five, not ten!

If you would like to use this content on this page for your website or blog, we only ask that you reference content back to us. Use the following code to link this page:
×

Like these riddles?  Also check riddle categories, quizzes, rebus puzzles, or just search for a riddle using a keyword or phrase.